We still know so little about our oceans. To be able to effectively protect the local species, we need to know how they live and survive. Their diet, their habits and preferences, their behaviour and their threats need to be analysed to be able to develop the most efficient conservation strategies.

Many Latin American beaches are considered some of the most important places in the world for sea turtle growth. This is why ETC’s primary research activity is the protection and monitoring of sea turtle nesting beaches and feeding grounds in and around the local province Punta Descartes.

The area around El Jobo is unique in its setting; we can conduct research on hatching turtles on multiple beaches, we can study juvenile turtles on the nearby feeding grounds and we can collect data on adult females that come to lay their eggs on the nesting beaches. This allows us to study turtles from all age and all year long, which makes ETC's location in El Jobo very interesting for sea turtle research.

The two most common sea turtle species on Punta Descartes’ beaches are the otherwise rare black turtle (Chelonia mydas) and Olive Ridley (Lepidochelys olivacea), which both nest year-round on all beaches. From May to September, the extremely rare Hawksbill turtle (Eretmochelys imbricata) may also be observed.

ETC conducts research by analysing the already existing data from multiple years as well as gathering new data from monitoring activities and night patrols (link to the night patrol text).

On night patrols, nesting sea turtles are tagged, which is done by small numbered titanium flipper tags. By doing so, we can study their migration patterns, estimate the population size currently living in the Pacific region and know which ones are nesting and where they are foraging. Once this information is collected, it can be used to improve monitoring activities and manage the conservation of sea turtles in the Pacific region. 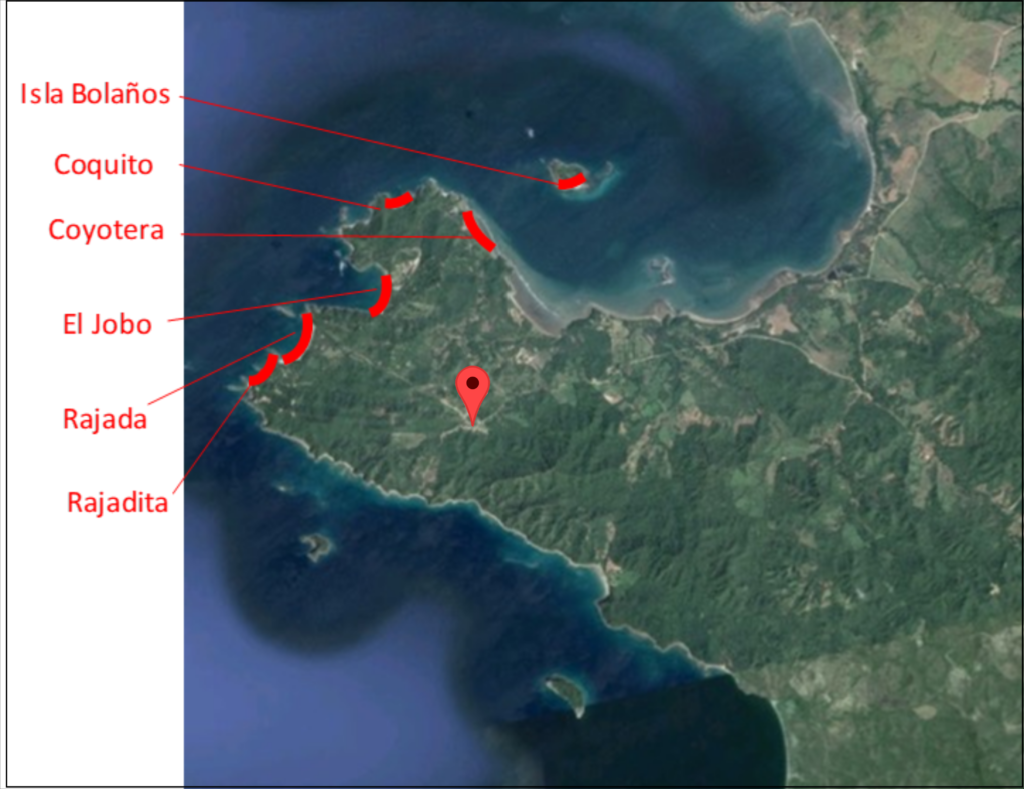 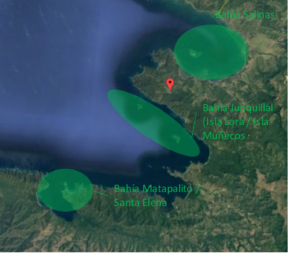 Besides monitoring the beaches, ETC also monitors two different foraging grounds every two weeks in a successive mode, if environmental conditions allow. Those are Bahia Salinas located in the North and Bahía Matapalito, located in the South of Punta Descartes, accessed via a 30-45 minutes long boat ride. At foraging grounds, ETC monitors juvenile and adult turtles, which are caught using a specially designed sea turtle tangle net. Additionally, turtles are caught by hand. ETC Biologists, with the help of volunteers, bring turtles on board, which are then measured, weighed, tagged and sampled. We believe that Bahia Cuariniquil – especially Bahia Santa Helena and Bahia Salinas – are important feeding sites that we must protect!

In the north Pacific of Costa Rica, especially in Gulf of Santa Elena, Punta Descartes and Bahía Salinas many different rays can be found.

There are benthic rays, which feed on the ocean bottom like round rays (Urotrygon chilensis), round stingray (Urobatis halleri), butterfly rays (Gynmura crebipunctata), the giant electric ray (Narcine entemedor), different species of guitar rays (Pseudobatos spp) as well as the longtail stingray (Hypanus longus). We also have species of pelagic rays, which feed in deeper open water, like the devilray (Mobula thurstoni), and the white-spotted eagle ray (Aetobatus laticeps). In total, we have identified about 24 different ray species in the waters around El Jobo!

The majority of these species are consistent with those species already registered in the central Pacific of Costa Rica. However, recent observations are leading the team to wonder if this area is characterized by its ability to provide sufficient habitat for different life stages; including nursery grounds for neonates, as well as rich feeding habitat for juveniles and adults. The oceanographic conditions and biological interactions of Punta Descartes region is different than the rest of the Pacific of Central America due to its cold water and seasonal nutrient flow. These variations may play a role in influencing the presence, behaviour and migration patterns of various marine species in this area. In this context, Equipo Tora Carey built a multidisciplinary team of scientists and local research assistants, that include both children and adults, to identify the species of rays, determine patterns of distribution, movement and local residence in the our area. Samples are collected via free diving and scuba diving, as well as with the assistance of artisan and sportive fisheries.

Six true parrot species can be found in Costa Rica. Here in El Jobo, we host a unique population of yellow-naped amazon parrots, which are famous for being excellent at imitating human voices. However, they can only exist in the dry tropical forests in parts of Nicaragua and Costa Rica and thus have the smallest population and narrowest range of distribution of all fellow species in Central America. Next to the extinction of these habitats, the main threat to the parrot is its own special gift; the ability to imitate people. Humans illegally extract their chicks to raise them as pets in captivity in foreign countries with no opportunity to reproduce and thus endangering the whole species. 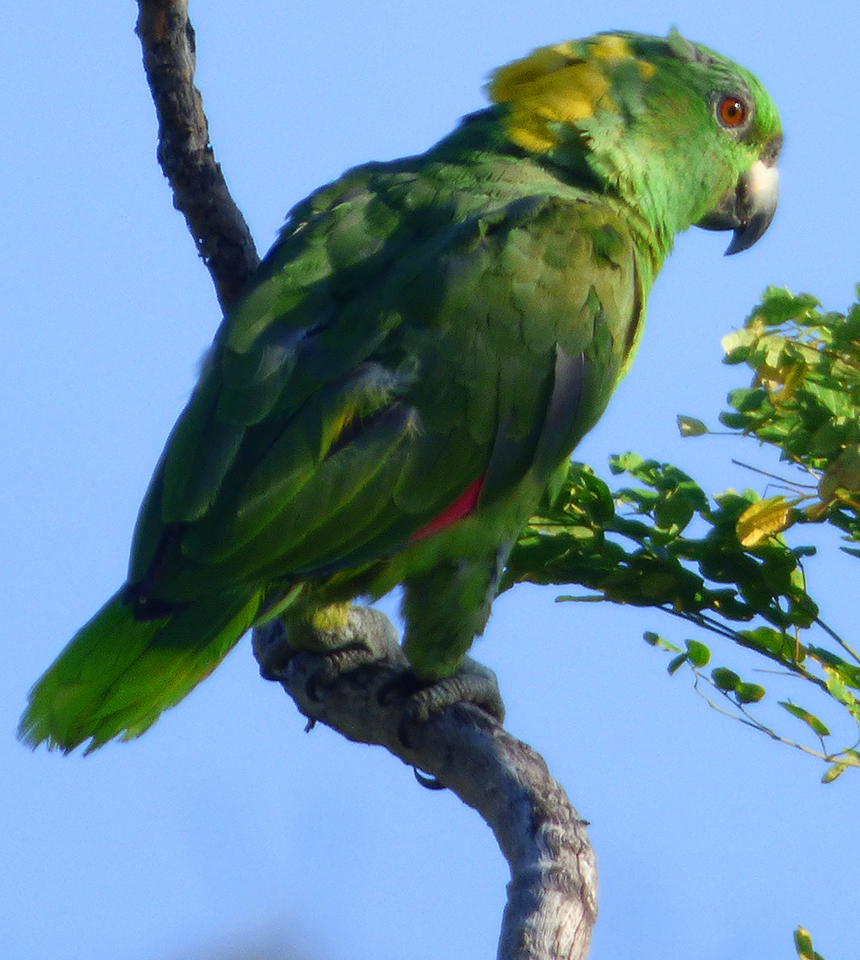 Our goal is to fight the extinction of these beautiful birds. Therefore, we conduct daily parrot counts between 3:30pm – 6:30pm. In this time corridor, the parrots usually migrate between their feeding and sleeping places and thus enable us to get valuable data about their population size, their change in behaviour with respect to environmental conditions and their breeding seasons. This is not only crucial to find out more about relatively unknown habits of the yellow-naped parrot, but also serves the purpose of raising awareness about the existence of these parrots in Costa Rica.

Our work has already shown results; thanks to the efforts of ETC staff and its volunteers, 2017 has been the first year in El Jobo in which no chick has been stolen!

In partnership with Área de Conservación Guanacaste (ACG), a network of protected areas and a World Heritage site in north-western Costa Rica, we monitor seasonal populations of whales and their behaviour. In order to do this, we work with a database where we insert crucial information from the observed whales, such as their position, the type of their group, their activity and many others. We also collect data in the form of videos and pictures of the tail, back fin, sounds and biopsies. In summary, we monitor and store every kind of data on whales that we see in order to conduct research and develop conservation strategies.

B) Other open projects

The El Jobo area also offers shelter and feeding ground for multiple other species not studied by ETC yet. Apart from whales, we currently collect data on the activities of sharks and crocodiles in order to identify all species found around El Jobo. We are looking for collaboration options on researching the above mentioned animals in order to acquire more experience and knowledge.

If you are interested in researching one of the above species in El Jobo, contact us and we will be happy to get in touch with you! (with link to contact us)